There is a thing, and I call it the “Kal-zone.”
This thing is courtesy of Ascent Cycling shop cat Kal Farmer.  It involves a Transition Klunker bicycle, a wheelie-with-bar-spin, and the fire booter jump at the 24 Hours in the Sage 2013 mountain bike race held in Gunnison, CO on August 24-25, 2013.  It is equal parts epic and hilarious, which, coincidentally, is also a fairly accurate riding style summation of the trick’s originator.
Kal is first rider out on course for the shop’s four-person townie bike team, lovingly entitled “Sofa King 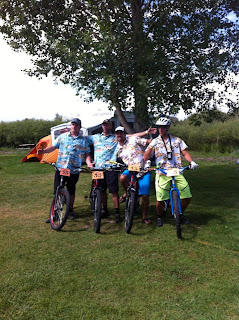 Townies.”  Say it quickly for the full hit of azure-tinted humor, or say it slower and keep everything rated PG, but either way I can assure you the moniker meshes perfectly with the outlook of the team.  Kal, Justin Holmes-Winters, Pat Cross, and Clay Allison are here to remind everyone- and I mean everyone– that 24 hour mountain bike racing is as much about having an excuse to party as it is about reaching one’s anaerobic threshold and tasting copper in the back of one’s throat.  Team race rigs are decidedly un-XC 38lb bicycles better equipped for a leisurely pedal on a boardwalk than a race course with 1,400’ of “up.”  Heck, the Transitions only have coaster brakes!  Drifty.

“Ascent Cycling” is the name of Lane Sherman and Justine Gehrett’s coed duo team, a team focused on the other half of the “party/punishment” equation.  Lane privately remarks to me that they were aiming for a podium finish, but that if they were well out of it by nighttime they would shut it down and hit the hay.  Knowing Lane has a competitive streak a Texas mile wide, I raise an eyebrow at the declaration but remain silent.  Both Lane and Justine are strong riders, and I figure they have as good a shot of landing themselves in the top three as any. 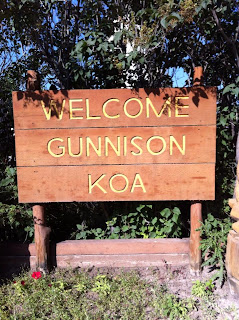 David Krycho, longtime supporter of the shop, showed up for the race as a solo entrant, demo’ing a Specialized Epic Expert Carbon 29er, his first extended exposure to larger wheels.  Originally planning to be a part of a four-person team, he adapted to his circumstances with an attainable race goal of six laps, or 84 miles, dubbing his effort “Red Baron’s Solo Mission.”  He spent a lot of time leading up to the race on his road bike, putting together big miles on long rides, and that training should serve him well in the coming hours.
Yeah, I’m in it too.  I convinced friends both near and far to join me for a four-person single speed team, and am getting psyched for the race to begin.  Shop utility man Mike Hartman is up first, with my buddy Brian Conley on deck.  I’m in the hole, with Brian’s wife and my friend of eighteen years, Mandi, riding cleanup.  The Conleys made the trip from Boise, ID, travelling the 800 miles because of the pitch I gave them regarding the sheer quality of the race in its entirety.  I regaled them with tales of my previous adventure in the Sage, and had their full buy-in.  The four of us are out here to have a good time but to push ourselves on our laps, see what we have in us.  We want sixteen circuits of the course, requiring each of us to throw down four laps.  Our team name?  “Team AC: The Lonely Gear.”
Dave, Justine, Kal, and Mike head to the starting line.  Their teammates walk along behind to egg them on.  The race is sold out for this year, pulling in its self-imposed maximum compliment of 300 riders.  The starting area is raucous, the air punctured with cowbells, and spectator yells, whistles, and “whoo-hoo’s!”  Pop music punches above the din, the beat providing a tempo for riders to call on as they pedal out of the Gunnison KOA, heading for the hills.  It’s an atmosphere you find at quite a few races, but it takes on special meaning in a 24 hour event because it’s an acknowledgement by racer and supporter alike of the task ahead.  In other words, “Get amped, boys and girls.  Find that fire inside you that makes you dig deep.  You’re gonna need it.” 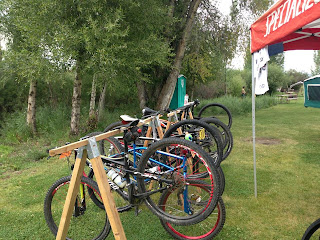 So that’s the stage set then.  We’re off on a journey that will bring us happiness, pain, satisfaction and frustration in unequal measures.  We don’t know exactly how it will play out, but for all of us who descend on Gunnison for this spectacular event, we are optimistic.  The countdown gets piped in on our race announcer’s loudspeakers.  There’s the “go!” and there the racers go.  We smile.  We cheer.  At noon on August 24th, our day begins.

Powered by Convert Plus